Lorenzo’s Journey with Cerebral Palsy (from his Mother’s perspective)

I’ve been thinking about this for a year now, wondering if our story would be of help to some walking our path. I have the unique position of being Lorenzo’s mom but also a member of the TalkTools® team. It is from my “mom’s heart” that I share our joy, fear, amazement, pain and all other emotions that we as parents go through. I’ve read and heard of so many TalkTools® related success stories and each one deeply impacts me. I felt now was the time to share Lorenzo’s tale of courage in celebration of World Cerebral Palsy Day (Oct. 6), with the hope of helping other parents who might be feeling hopeless.

First and foremost, I want to say how incredibly blessed we are to have Lorenzo. Having a child with any kind of impairment or disability can be very scary and overwhelming especially as 1st time parents.

Where do I begin… Lorenzo was so wanted and so loved the moment he was conceived!

About 3-4 months into our pregnancy, we found out that Lorenzo might have some complications in utero. Everything from extensive fluid on the brain, possible spina bifida, holes in his heart, small cerebellum, and thin corpus callosum. As a mom, better yet as first-time parents – you can probably imagine this was all overwhelming. My husband Carl and I did a lot of praying and a lot of questioning “why” – why us? We wanted a baby so much. Thinking he may be taken away from us was heart-wrenching. 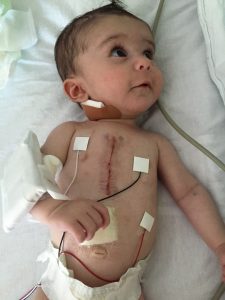 Lorenzo was born on January 28, 2016 – and he was perfect! He did have some of those earlier concerns but they all seemed manageable at the time. He was born with small amounts of fluid on the brain which self absorbed within 3 months after birth. However, those holes in the heart that were dismissed early on, now were a major problem. Lorenzo had two large holes in his heart, and at barely 2 months old he underwent open heart surgery to have an ASD/VSD repair. The surgeons discovered a 3rd tiny hole during surgery and they decided to repair it which resulted in Lorenzo being on bypass longer than anticipated. With any person being on bypass, this can result negatively with oxygen loss. Lorenzo recovered amazingly. Within 6 days he was released from the PICU and was pretty normal. 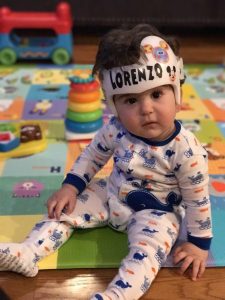 Soon after we started to notice he was not hitting typical milestones of his age. He was diagnosed with torticollis at about 5 ½ months and was fitted for a Doc Band which he wore for about 8 months accompanied by Physical Therapy (PT). During those 8 months, his physical therapist alerted us to his low-tone. It was a challenge for him to sit up, crawl, pull to stand etc… It’s crazy — in hindsight that I would work for TalkTools®. I could have totally used the high chair helper – but we ended up using towels and stuffed animals to hold him more upright in his chair so he could eat and play in his high-chair.

At about 2 years old, Lorenzo was fitted for the short AFO braces which ultimately resulted in him finally being able to walk – which was incredible. He wore them for about 4 months. It was summertime, and his physical therapist thought it would be best if he could feel sensations on his feet touching the ground and sure enough, it worked — he took off walking and then tried to run!! AFOs at that point weren’t needed, so we suspended using them. Then, at about 3 years old, still receiving Physical Therapy and now Occupational Therapy (OT) – it was recommended that we see orthopedics. At this time Lorenzo was walking and running, but it was a real struggle for him. He was very high on his tippy toes, tripping himself, very off balance, falling all the time as his feet would turn in. Again, no parent wants to see their child struggle, so we quickly set the appointment.

After meeting with Orthopedics, we had a few more diagnoses to add to the list including Dandy Walker and now Cerebral Palsy (CP). As first-time parents hearing the words “Cerebral Palsy”, made our hearts sink, thinking of all the challenges he may have going forward. His official diagnosis was a mild case of Spastic Diplegia Cerebral Palsy. So on a scale of 1 to 10, 10 being extreme – he was like 2 to 3.

So what does this mean?

How can we help him? 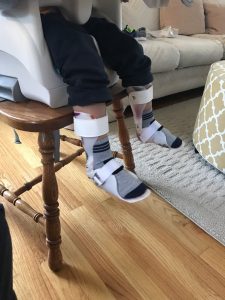 We had so many questions, but we also had an incredible team of doctors working to determine how they could help him. The first step was to get him fitted for new knee high AFO braces and intensify his PT/OT. Over the next two years he would have hinged and unhinged braces. Next, we discussed botox injections to the muscles in his legs to help relax the muscles so the AFOs would encourage the appropriate stretch in his leg to give him more range and flexibility to walk flat instead of his tippy toes. We saw some progress… but not enough. Carl and I aren’t the type of parents to sit back and wait. We researched, emailed the doctors, set up tons of appointments with them to discuss other options or opportunities — but many of them were dismissed. 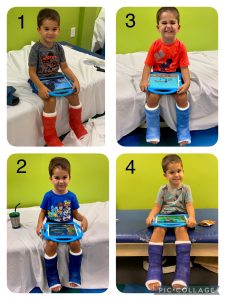 In 2020, amidst Covid-19 at its height… We moved from Connecticut to South Carolina. We did this for many reasons – but more importantly we knew MUSC had advances in children with CP. We had only been in South Carolina for about a month when we resumed PT for Lorenzo. His new physical therapist discussed Serial Casting with us – which we had never heard of. Serial casting is a procedure that helps children (and adults) improve their range of movement. The procedure uses fiberglass cast with padding to hold a part of the body in a position (in Lorenzo’s case, it was his legs) that will stretch a tight muscle. The cast was applied weekly for 4 consecutive weeks, maintaining the muscle in a stretched position. It was miraculous – within the 1st week we made so much progress and by the end of the 4 weeks he had gone from a -22 to a +10 with range of motion in both legs. 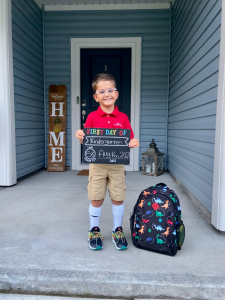 Lorenzo continues to make progress – slowly – but progress is progress to us!! In August 2021, he started Kindergarten at Berkeley Preparatory Academy (BPA). First time in a big boy school as he calls it. Scary for us, as parents? YES! But we have an amazing amount of support starting with the principal down to the care team. He has teachers that love and care for him and a whole host of in-school therapy to begin after his IEP is final including PT/OT and SLP services. They all made it a priority to get to know him even before school started. This all made his 1st day at BPA a little less scary for us. He’s on the right path and we have no doubt that he’s going to thrive no matter what he does or where he goes in life. He’s only 5.5 now, but we know God has some big plans for him.

Lorenzo takes every new challenge with a smile. If he can’t do something like other kids, he will always find another way to do it!! He’s so smart, resilient and brave – we’re so insanely proud of him and could not be more blessed to be his parents! 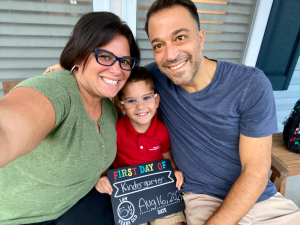 SShare Your Story
What links me to the special needs community? I feel like my life has been one beautiful journey…
EElizabeth's Journey
So How are Your Summer Plans Coming Along? I know that the transition from a set school schedule…
SSuccess Stories
Josh is a 15-year-old with cerebral palsy who has been seen for speech and feeding therapy for the past…
SSuccess Stories
Maureen Dykinga, MS, CCC-SLP, reached out to TalkTools last year to request a donation for SPOON Foundation‘s upcoming trip to Mauritius. The…
EEducation Partners News
Expand your Knowledge. Learn from the best who will equip you with expanded knowledge, techniques, and strategies to…
TTalkTools News
This April, TalkTools is hosting 4 live webinars so that you can earn ASHA-approved CEUs directly from your office. Or the…