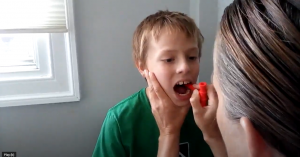 Never would I have thought that a global pandemic would bring with it so much discovery.   The kind of discovery for my son that is finally bringing him words.  The closure of the world brought with it a necessity to find a way to work on speech with my son at home.   Noah is 12 and has an Autism diagnosis.  For most of his life he has been non-verbal.  Not because we haven’t tried or that he hasn’t tried.  It was just something we were never able to crack.  And as the years went on, the ability for schools and therapists to believe that the potential was still there was quickly fading.

Online speech during this time was proving to be almost impossible.  Especially the manner in which the service was delivered.   It was simply too many screens, with too many instructions.   We were lost.  In an effort to save our sanity, we decided to stop.   I made the decision we would go it alone and the observations began.  I began to ask myself “What can Noah do and what can’t he do”?  For some reason, I started with his tongue.  His tongue’s inability to tap the top of his mouth.   This one thought led me to the elevation tool.   This simple web search then brought me to the Talk Tools website.  And to my surprise a course was offered.   I took a leap and I registered.  I had nothing to lose.

It was from this point that everything changed.   The OPT Level One course I signed up for had me at hello.   Or I should say had me when Sara said “Sound is the last thing that happens”.  A light suddenly clicked.  In all these years, no one has ever started at the beginning. I began observing his mouth.  His tongue had no idea how to function.  His jaw was constantly open.  He wasn’t chewing his food.  My head was buzzing with all this new information.   We had to find someone to help us execute this therapy.   And that’s exactly what we did.   I finished the course and began searching for a therapist.  The only problem was, we were in a global pandemic.   Absolutely everything was closed and there was just a single OPT therapist in my area.   I reached out, told her my story and we agreed to start therapy online.

This is where the magic happens.   We ordered supplies and began working virtually with our therapist.  As it turns out, it really wasn’t magic.  We just met my son where he was.   We started at the bottom.  Building a strong foundation that would be systematically added to as skills were gained.   And boy did he gain skills.   We had nothing but time during the closure.   We did daily and sometimes 2 OPT sessions per day.   My therapist would create a plan that I would execute.   Noah not only learned.  I learned.  I learned how to help him.   With bubbles, straws, horns and a complete awareness of exactly where his issues had been hiding.  Every day we were learning something new and learning we could do something about it. 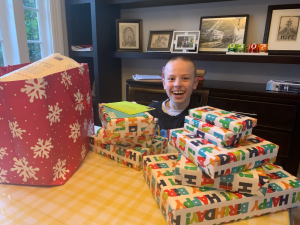 I am so happy to report that for the first time in my son’s young life on his 12th Birthday he delivered this message to the world.  “Hi, my name is Noah.  Today is my birthday.  I’m 12.  Happy Birthday to me”.   If there was ever a drop the mic moment, this was it.

It is now April 19th and my son has been working on OPT for just 9 months.   In 9 months, we corrected so much.   His jaw is strong and stable.  He can chew.   He can retract, depress, elevate and lateralize his tongue.   He is learning to breathe through his nose.   And lastly, he is at the very beginnings of having very functional verbal speech.   Hearing your son use his voice for the first time at 12, is an amazing feeling.  A whole body feeling that makes you cry tears of joy.

I teach yoga.   And any yoga pose is built on a strong foundation.  Yoga requires strength, stability, flexibility, awareness and breath.   And to be successful you start at the beginning.   Thank you TalkTools for making me aware of Noah’s beginning place.   We have so much work ahead of us.  The difference is we now know where we are going and how we are going to get there.   I also have an entire video library of Noah’s journey that I will treasure forever.

I cannot express to you enough how much this therapy, this time has meant to us.   With immense gratitude,

SSuccess Stories
Grace Kauk writes about her Oral Placement Therapy work in Bulgaria. “I met Steve and Tanja Pankratz over email…
SSuccess Stories
My name is Jenna Kobara and I am an occupational therapist (OT) who recently returned from my third…
TTalkTools News
Here are pictures and updates from our therapy mission trip to Roatan! Thank you all who made it…
TTalkTools News
“Every morning I wake with cautious optimism for the day, hoping I have breakthroughs with your child and…
AAnna's Advancement
Anna had a birthday!  She is now 6 years old! We went out to eat for breakfast, something…
TTalkTools News
We are excited to present TalkTools live webinar offering 2.0! We introduced speech & feeding live webinars in…